The following is a list of 10 of the most popular trees around the world.

First on our list is the largest living tree in the world – The General Sherman tree. Named after the American Civil War general, William Tecumseh Sherman, this tree is estimated to be 2,300–2,700 years old and is around 274.9 ft tall with a circumference of 102.6 ft at the base.

It is to be noted that this tree is largest only in terms of the total volume ( which is length, height and width combined.)

Look at the following picture to get a rough idea of how huge the tree really is.

The Bialbero de Casorzo (Grana Double Tree) is a unique living tree of its kind. It consists of a cherry tree which grows from within a hollow mulberry tree! Such trees (known as epiphytical trees) are not uncommon but most of them don’t survive for too long because of the lack of nutrients. The Grana Double Tree is an exception which is one of the reasons for its popularity other than how majestic it looks.

3. Chestnut Tree of One Hundred Horses (Mount Etna in Sicily)

Thrid on the list is the One Hundred Horses Chestnut tree. Not only does this tree look massive, it is also the largest and oldest known chestnut tree in the whole entire world!

This tree has a circumference of 57.9 meters and was entered into the Guinness World Records in the year 1780 under the title – ‘Greatest Tree Girl Ever’. As for its age, this tree is over 2000 years old. Some research indicates that it could even be over 4000 years old!

Legend has it that the queen of Aragon (Medieval kingdom) along with one hundred knights were once caught in a thunderstorm and took shelter under this tree. And that’s where the name of the tree comes from in-case you were wondering.

Not only is this tree one of the oldest olive trees in the world, it still produces olives! This tree is estimated to be around 2000 to 4000 years old.

The chandelier tree (which is a coast redwood tree) made this list not only because it’s a huge tree (276 ft tall) but also because it is a tunnel tree (also known as a drive through tree). In other words, you can actually drive through this tree because of the huge hole cut through its base.

This is also one of the last surviving tunnel trees in the United States. Many other trees like ‘the Pioneer cabin tree’ and ‘the Wawona tree’ could not survive the cut and have fallen since.

6. The Tree That Owns Itself (Athens, Georgia, United States)

This is a giant white oak tree which according to local folklore – legally owns itself and all land within eight feet of it’s base! This tree have appeared in numerous national publications and is a local landmark.

Not only does this cashew tree look phenomenally beautiful and massive, it is also the largest cashew tree in the world!

The tree entered the Guinness book of records in the year 1994. The overall size of the tree is equivalent to 70 normal size cashew trees put together and has a circumference of 1600 ft. It covers an area between 7,300 square meters (1.8 acres) and 8,400 square meters (2.1 acres).

The curtain fig tree made it to this list because of its sheer beauty. The tree derives its name from the thousands of roots that hang from its trunks giving it the look of a curtain. It is also one of the largest trees in Tropical North Queensland, Australia.

This is also a heritage-listed tree (added to Queensland Heritage Register) and is one of the best known attractions in Yungaburra town, North Queensland.

Located in the Mahabodhi Temple in Bodh Gaya, India, the Bodhi tree is the direct descendant of the original Bodhi tree under which Gautama Buddha attained enlightenment.

Descendants of this famous tree have been planted at various locations around the world. For example, a direct descendant is planted at the Foster Botanical Garden in Honolulu, Hawaii and another one at Anuradhapura, Srilanka.

The first on our list is the Thimmamma Marrimanu and for a good reason too.

The Thimmamma Marrimanu is an insanely huge Banyan tree spread over 19,107 square meters or 4.7 acres of land (imagine 3 soccer pitches put together! It is considered the largest tree in the world in terms of the area it covers. It also seems to have made its way into the Guinness book of world records in the year 1989.

This popular tree is around 550 years old and has a small temple beneath it dedicated to Goddess Thimmamma. It is believed that the spirit of the Goddess resides within the tree. It is also believed that childless couple who worship the tree, will beget a child within a year.

Having a Bad Day? Here’s a List of 50 Songs to Cheer You Up! 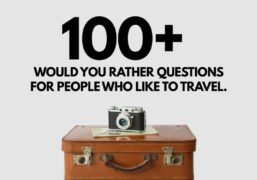 101 Would You Rather Travel Questions For Anyone Who Loves Traveling